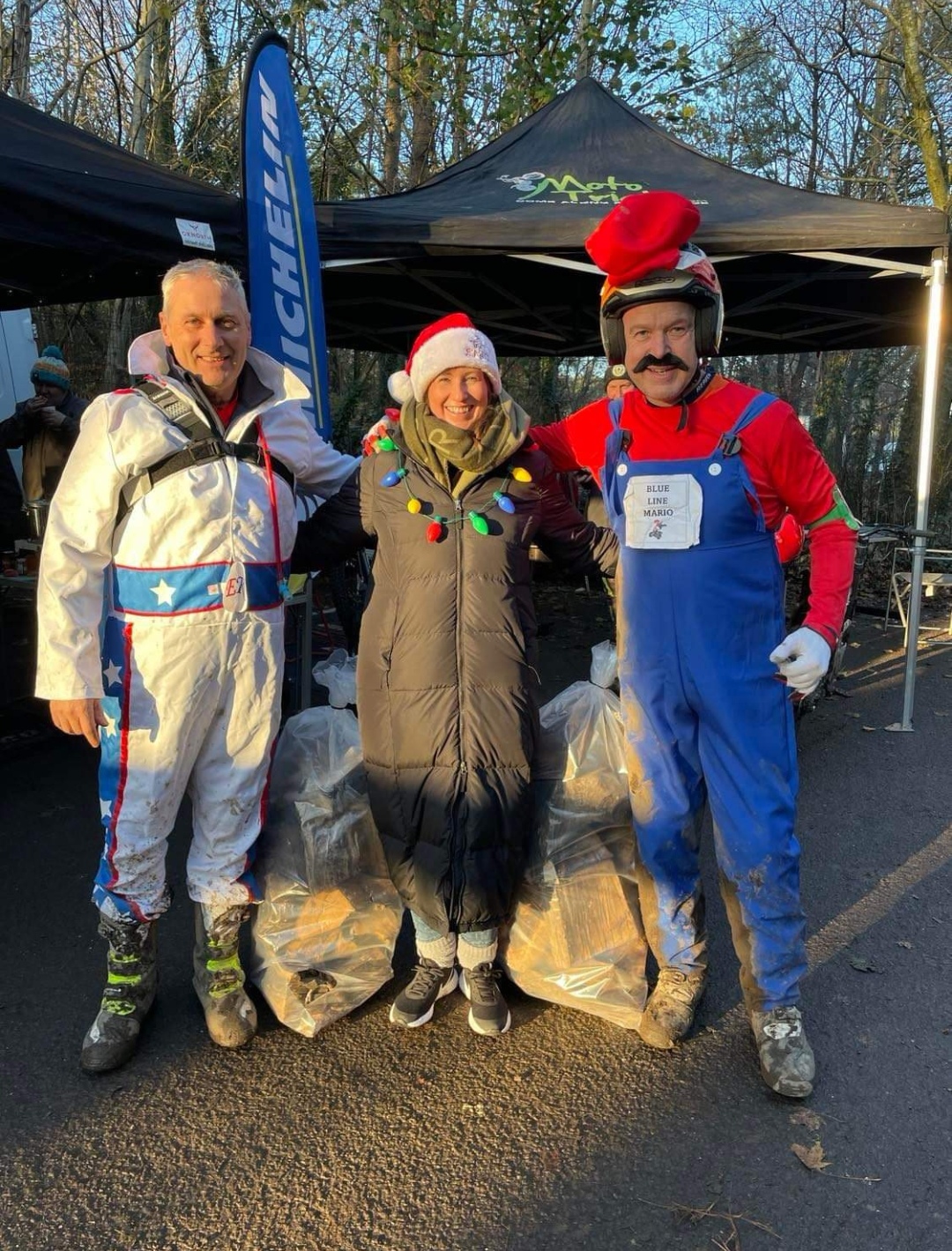 On Saturday 17th December Moto Trial NI staged their final trial of the year at Whitespots Trial Park.
This is the club's closing trial and is hosted in a fun and festive atmosphere with the focus being on having fun on your bikes with friends and a get together for some festive nibbles at the end.
Northern Ireland was like most of the UK dusted with frost all week and on the Friday Andy Perry and Ryan Sailes braved the cold to set out a course of 8 sections in the park, to be tackled over 4 laps.
The trial had over 70 entries and started at 10.30 with the 20 Clubmen away first, followed by over 30 in the Sportsman grade. These were then followed by Novice and Youth grades.
Many bought into the fancy dress theme with a gaggle of elves, an inflatable santa, but the winners had to be Davey Mulligan who came as Super Mario complete with big fake tash, and Gary Johnston who donned a brilliant Evel Knievel outfit complete with flowing cape.  The judge Mervyn Hanlon couldn't separate them so it was a tie, with each getting a prize of a big bag of logs for the fire from Some Hanlon YouTube team.
As usual all grades had some fantastic battles between the riders. In Clubman local rider Ken "elf" Perry took the win on 3 marks lost with Alex Lennox 2nd on his retro bike taking the tie break from Ross Allen both on 7 marks.  Fourth then was Jamie Chambers on a twin shock Yamaha on 19 marks lost with Lee Burns taking 5th on 20 marks lost.
The Sportsman grade as has been the norm had the biggest entry with over 30 riders taking part. Both new and old machines and riders of all ages tried to take the win, but it was two of our "mature" riders, on even more mature bikes that ended up inseparable over the 4 laps.  Desy Leckey and James Chambers had a faultless trial not putting a foot wrong once to finish tied on 0 marks. Gareth Jones took 3rd on 1 mark lost, with a three way battle for 3rd in which Johnny Russell, George Robinson and Kyle Hewitt all finished on 2 marks lost, with Johnny taking 3rd on further clean, the George and Kyle.
In the Novice grade, which is designed to bring new riders into the sport Jason Brown took the win on 14 marks lost, with Roy Beattie 2nd on 25 marks and Ivan Chambers 3rd on 30 marks.
In the Youth B grade Eddie Page won on 15 marks lost.
In Youth C the two Ollies battled away all day with Ollie Reid taking the win on 23 marks lost leaving Ollie Gilmore 2nd on 33 marks and Toby Jones 3rd on 38 marks.
In Youth D Jenny Crawford took the win losing 46 marks.
Nicola and Stephen Coulter again laid on a fantastic spread for the riders and observers with a massive pot of beautiful vegetable soup with rolls, tea, coffee, mulled wine, mince pies and chocolates.   Anyone who had been out up the hill was very thankful for this and the big fire pit at the car park once the trial was over was like a magnet to riders and spectators alike to get some heat back into them after being out in the cold.  The sun actually came out in the mid afternoon to help warm folk up!!!
The club as always wish to thank the landowners, the observers, Nicola and Stephen for the festive fare, U hire for supplying toilet facilities, but MOST importantly the riders for supporting the club by coming along, even with the freezing overnight conditions, I am sure they all enjoyed the day despite the cold.
The club would like to wish everyone a healthy and happy Christmas and look forward to more of the same in 2023

The Ibex club ran an excellent New Year Eve's trial, results can be found below.