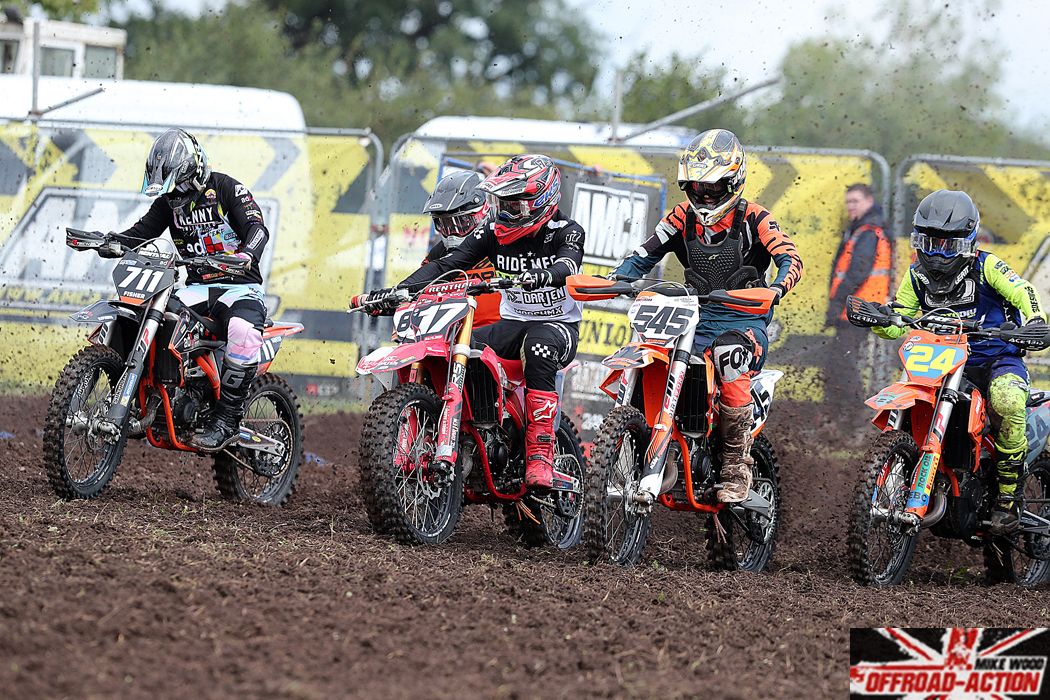 Five full throttle, all-action and intense Championship moto’s in one weekend is physically and mentally a tough ask for anyone, so for a rider to then perform at the highest level and record an unbeaten score is surely a momentous achievement at any level of the sport! During round 5 of the 2022 AMCA British Motocross Championship sponsored by Dunlop and held at Lower Drayton in Staffordshire, both Luke Burton (FUS Marsh Geartec Husqvarna) and Matt Bayliss (Darjen Contractors GasGas) hit that incredible goal, so take a richly deserved bow gentlemen!

In MX1, Burton was simply magnificent and controlled every single clash. His only worrying moment came in race two on Saturday when picking up a front wheel puncture in the closing stages. From being an almost certain winner in that one, he suddenly came under intense pressure from James Dodd and Josh Waterman who were enjoying a simply stunning battle, just one of several throughout the weekend. Such was the pace of those two battling Honda aces  that they rapidly reeled in Luke Burton and got within striking distance only for time to run out. Throughout the weekend, Doddy got the better of Josh in four of the five moto’s and that means that he has reduced the gap at the top of the series standings. With two rounds remaining, Josh is on 790 points, 7 clear of James with Luke getting closer and a further 13 in arrears. Moving up to 4th in the MX1 table is Adam Wells and what a brave effort he was to produce at Lower Drayton, completing all five moto’s despite a badly injured hand.

Enjoying one of his more profitable rounds of 2022, Matt Ridgway was fastest away in the opening 125cc moto of the weekend before first Chris Povey then eventual winner Matt Bayliss took control. Whilst Ridgway had to settle for 6th at the finish, Luke Dean charged hard coming from 5th up into 2nd. So with Povey getting home in 3rd, youngsters Joel Fisher, Wesley McGavin and Yarin Evans all started with very strong performances.

Following a similar pattern, Ridgway again got the holeshot in moto two before as per the opener Povey then Bayliss took over. The difference on this occasion was that title contender Dean was right down in 18th and with plenty of work to do. Working very hard in an attempt to keep his title hopes on course, Luke eventually climbed back to a great 7th with McGavin, Ridgway, Jordan Wright and Louis Vincent all ahead of him. Normal service then returned in the last clash of day one as super Bayliss took another win from Dean, Povey, Wright, Fisher and Ridgway having a great ride on his spare bike, also suffering a crash early on. After starting the event strongly with two very impressive results, McGavin had to settle for 17th this time, making a mistake which dropped him down from an early 6th spot.

Both races on Sunday saw Bayliss collect the wins from Dean and Povey as Ridgway, Wright and McGavin again bagged some big points. Special mention to young Evans on the SRH KTM enjoying his best points return of the season and Cameron Jackson of the CPMX Racing KTM team who impressed during all five moto’s. But back to Bayliss and by scoring that super five moto win success he has now increased his advantage at the top to a very handy 68 points with Dean in 2nd and Povey a further 70 points in arrears. Holding 4th in the table is Fisher and he’s also the leader of the 125cc Youth Championship standings.

The MX2 action at Lower Drayton was to produce plenty of great racing and some dramatic moments, typified by the very first race of the weekend. In that one, series leader Shane Carless controlled all the way as Henry Williams and Jake Preston fought out a titanic struggle for the right to finish 2nd. However these two lads were to then be joined in the closing stages by the hard charging, all-action Tommy Alba who after gating 6th was on a right mission. Aboard his fast 2013 2T KTM, Tommy got up to pass Preston on the final lap for 3rd with Rory Jones, Harry Linton, Lee Truman and Corey Hockey who had gated 15th next up.

Despite initially leading the second MX2 contest before dropping to 2nd, Williams did not enjoy the best of conclusions to this one, being impeded and brought off by a wandering backmarker. Thankfully, Henry was able to quickly remount and finish 3rd behind winner Carless who had took control early on and Alba. Having a great ride, Preston went from 10th up to 4th but day one was then to not finish well for the FUS 2T Husqvarna ace. Leading moto three, Preston’s engine blew thus allowing first Williams then the flying Carless to take control. Also not enjoying a satisfactory conclusion to day one was Hockey who disappeared from proceedings on lap four thus ruining any hopes of a podium placing at the end of the weekend. So MX2 on the opening day finished with another win for Carless ahead of Williams, Alba, Jones, Zac Stealey, Brooklyn Evans and Logan Wilcox.

Before Sunday’s MX2 action had even got underway there was to be major drama as Carless suffered a massive off during practice injuring his ribs and hip. In grimacing pain, Shane had to be virtually lifted off and on his bike for the rest of the day but this tough Welshman is a true Champion and was determined to still race on in the defence of his title. And that’s just what he did, even remarkably grabbing the holeshot in the first race of day two before being passed by Alba, Williams, Hockey and Jones.

Showing then just how quickly fortunes in motocross can change Shane’s FUS teammate Jake Preston was to be left very frustrated in the final MX2 moto leading the way before a red flag halted proceedings. Remarkably in the restart, Jake found himself in last place before producing a fantastic ride to get back to 7th behind winner Williams, Alba, Hockey, Jones and Carless. Early on Shane had been right up to 2nd only to suffer another painful crash on lap seven. Enjoying one of his strongest performances of the season, Cory McShane got home in 8th enough to earn him 6th overall on the day and also leadership of the separately scored MX2 Cup competition. In the main MX2 standings, brave Shane Carless still holds a 40 point advantage at the top from Alba who in turn is just a single point better off than the Lower Drayton overall winner Williams.

There’s a new leader at the top of the Youth 85cc Championship standings. With Ollie Bubb otherwise engaged and competing at another event, Jack Evans, Sebby Moore, Will Turner and Oakley Kettle all took advantage to leapfrog him in the series table. Indeed the Youth racing at Lower Drayton was to produce plenty of great racing as Turner (2), Wyatt McGregor (2) and Harrison Davies all bagged moto wins. In the first one, Turner on the Midwest Racing Husqvarna led all the way, taking the win just 3 seconds clear of McGregor, Davies, Evans, Kettle and Braedon McGinn. With the South African rider McGregor earning top slot in moto two, Davies then bagged honours in the last race of day one.

Showing again though how fortunes can quickly change, Davies bike then stopped in the opening race of day two when holding 3rd place. Thankfully that incident occurred insight of the finish line so Harrison pushed his stricken machine past the chequered flag to still earn some Championship points. The winner of that one was again Turner chased home by the fast starting Kettle with Moore, McGregor, Evans and Ashton Phillips next up. In the final Youth 85cc contest, McGregor passed Kettle for the win to also give him the overall verdict for round five. In the Championship table, Evans is the leader 23 points clear of Moore and Turner a further 15 in arrears. The separately scored SW85cc class sees Oliver Bebb in control with Harley Piper and Lewis Day chasing hard.

What a superb contest the race for the 2022 AMCA Vets British Championship is proving to be. After the latest action at Lower Drayton, Gary Davies and Shane Holmes are locked together at the top on 851 points apiece with defending Champion Phil Mercer just a further 7 points in arrears. It was Holmes who won the opener of the weekend ahead of Mercer, Davies, Jamie Powell, James Lane, Simon Lane, Brian Staples and Matt Chaplin. In the remaining four moto’s, Davies and Mercer won two moto’s each to ensure that the title race continues to thrill.

For Mercer that narrow gap at the head of the table could have been even tighter but for a last race spill. Initially he had grabbed the holeshot before Davies and Holmes passed him in one big swoop. However, Phil was still in contact until falling and dropping down to 4th as Simon Lane went through when he was still remounting. Regaining his rhythm and composure, Phil did regain 3rd but by this time his title rivals had checked out. In the Vets Over 50’s class, Mercer though is still at the top from Staples, Alan Reese and Sean Smith who was a Lower Drayton non-starter.