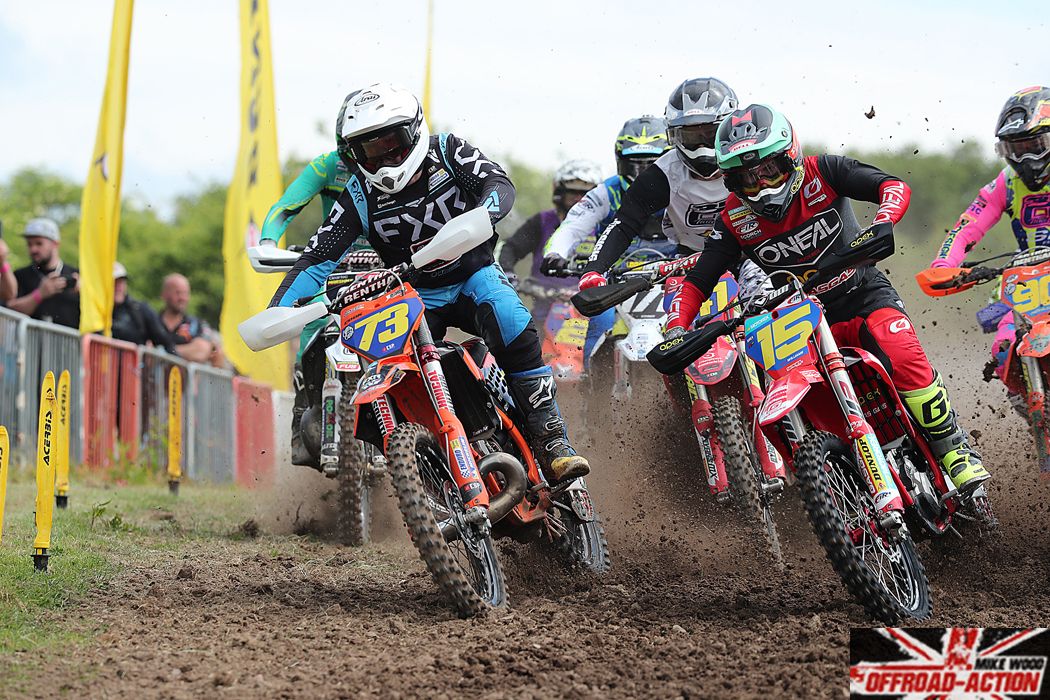 What a massive variation in track conditions round three of the AMCA British Motocross Championship sponsored by Dunlop was to produce! Testing a riders technical ability, determination and concentration to the maximum, day one at Warmingham Lane in Cheshire offered a dry, slick circuit with an ever increasing amount of dust followed then by very wet going on day two after the venue had been battered by overnight rain. Indeed that rain then continued to fall throughout Sunday’s proceedings but thanks to some extensive track preparation by the organising Middlewich MXC during the break between the two day’s, the event was completed with five full blocks of action. And that action was to prove very interesting, creating new leaders in the MX1, 125cc and Vets Championship standings.

So, let’s start with those changes in Championship leaders as Josh Waterman now tops the MX1 class. The opening race in MX1 was to really set the pattern for just about the entire weekend as Waterman, James Dodd and Luke Burton broke away from the pack to indulge in their own quality battle for honours. In style, Waterman won both moto’s on day one from Dodd and Burton as Adam Wells, Tony Craig, Jake Shipton and Ashley Greedy were the best of the rest.

On a wet day two, Dodd and Burton proved victorious early on before the sequence of dominance was finally broken in the final clash. In the early exchanges, Burton was forced out when a sub-frame bolt on his Husqvarna machine came loose leaving Dodd and Waterman to fight it out at the front. And, what a battle they were to produce, swapping positions before Dodd regained the advantage. Then, in a frantic conclusion, Waterman closed the gap and took the verdict right down to the final turn. Diving for the outside line, Josh just failed in his attempt to snatch glory as a delighted Dood took the win by the very narrowest of margins, in the process also scoring his first ever AMCA Championship overall victory. That result means that Josh leads the title charge just 5 points clear of James with Shipton now 3rd and Burton 4th. Going into the Warmingham event, Burton had led the standings but now finds himself 47 points off top slot!

With early 125cc Championship leader Kristian Whatley a non-starter at Warmingham, it meant that there would definitely be a change at the top in this class. And, once again, regardless of the difficult conditions these 125cc boy’s were to provide plenty of thrill a minute action during the five hotly contested moto’s as Matt Bayliss became the new series pace setter. Riding in his local area, it was though the talented young Joel Fisher who was fastest away in the weekend opener, leading for two laps before Luke Dean took control. From here onwards, Luke was the man, keeping his Fantic’s throttle wire tight and racing onto the win as Bayliss came from 6th up to finish 2nd ahead of Fisher, Danny Lanfear, Wesley McGavin, Jordan Wright, Louis Vincent and Kieran Cooke.

Moto two was to arguably be the best 125cc contest of the weekend as Fisher was again very quick off the start with Bayliss in tow and Dean rapidly finding a way past Cooke, Matt Ridgway and Chris Povey to thus slot into 3rd. Generating terrific speed, Dean then gradually reeled in the front two and so the race was on. With one lap remaining, both Bayliss and Dean overhauled Fisher then in a thrilling finish, Luke snatched a dramatic victory right at the death, what a race!

Consistently quick off the gate, Matt Ridgway got the holeshot in Sunday’s muddy opening bash only to disappear from proceedings early on. With conditions probably at their worst, Cooke took control for the next five laps before Dean who had gated 8th moved through to bag his third consecutive win of the weekend. Taking 3rd in this one was Povey as Bayliss had to settle for 4th after initially being down in 11th.

Suffering his first defeat of the weekend, Dean had to settle for 2nd in the next 125cc moto with Bayliss victorious this time around. After grabbing the earlier holeshot, the all-action Liam Gale got home in 3rd with Wright, Cooke, Jordan Ridgway and Yarin Evans next up. Having his best ride of the weekend after making his Championship return following injury, Charlie Hucklebridge took 9th in this one, sandwiched by Fisher and Povey.

Leading from gate to flag, Bayliss was the final 125cc moto victor as Dean saw off Povey in a super battle for 2nd with Gale, Wright, Fisher, Vincent and Lanfear finishing off their respective weekend with strong performances. So, at the head of the series standings, Bayliss has a nice 24 point advantage with Dean now up to 2nd following his show topping Warmingham Lane performance.

Over in the Vets, former AMCA 125cc Champion Shane Holmes is the new title pace setter following a dramatic, action packed Warmingham contest. The weekend started to plan for series leader and defending Champion Phil Mercer as he led Holmes and Gary Davies . However proving just how quickly fortunes in motocross can change, Phil was passed by Shane before clouting his left hand on a track marking post. Badly lacerating a finger and in massive pain, Phil still managed to bring it home in 2nd as Shane riding a 250F Honda, his third different bike of the series, took the win. Next up in this one was Davies ahead of Robert Lewis, Jamie Powell, James Lane and Simon Lane who had a stunning ride coming from last place after his start gate failed to drop!

With a very swollen clutch hand and damaged finger, Mercer could have took the easy option and now withdrew from the meeting, but determined to try and keep his title hopes alive he remarkably appeared for moto two. Struggling to even grip the handlebars, he then reared up on the start before later crashing off the track but still got home in a brave 6th as Davies took a classy gate to flag win from Holmes and Lewis.

Day two in the Vets was then all about a terrific trio of battles for victory featuring Davies and Holmes. In the first one, Holmes passed Davies for the win before the roles were reversed in moto two as Gary timed his ride to perfection, taking control late on the final lap. Then in a classic last tussle, the verdict went right down to the wire and final corner with Holmes winning by the tightest of margins. The top six overall was Holmes, Davies, Mercer, James Lane, Simon Lane and Sean Smith with Lewis missing out following a last moto DNF. In the series table, Holmes is on 480 points with both Mercer and Davies just 14 points behind on 466, it’s all to play for!

Rory Jones went fastest in MX2 qualifying but when the gate dropped it was Adam Cook who led the charge. Cookie was really giving it some gas and remained in control until lap four, eventually being passed by eventual winner Henry Williams and Shane Carless. Next up in this opener was Corey Hockey, Zac Stealey, Jake Preston, Brooklyn Evans and Tommy Alba. Moto two and the classy Carless led it all the way with Hockey having a super ride to get home in 2nd.

From the dry of Saturday to the wet of Sunday, but the result was the same as Welsh Wizard Carless reeled off another gate to flag win but this time Alba was right on it and signalling his intent by getting home in 2nd with Evans a great 3rd just ahead of Preston. Following that ride in Sunday’s opener, Alba then went one better to take the next MX2 victory of the day after quickly passing Carless. With Williams in 3rd, Cory McShane had his best ride of the weekend by scoring a very strong 4th just ahead of Hockey and Cook. On a borrowed Fantic very kindly lent to him by Meredith MX after encountering problems on day one with his own Yamaha bike, LRT rider Luke Newman finished 7th in this one.

In a great final MX2 moto, Carless and Williams were really going for it at the front. However although Williams led for most of the contest, Carless timed his attack to perfection, taking control two laps from home. Alba, Stealey, Harry Linton, Preston and Cook were next up but you have to feel for 11th place finisher Hockey. With his start gate failing to drop, Corey had to storm from last place and up through the pack. That result left him 4th overall and just outside the podium top three. In the MX2 title race its still Carless the pacesetter, 34 points clear of Alba with Williams a further 21 in arrears.

Boasting an undefeated record in the Youth 85cc races completed so far, Ollie Bubb’s chances of extending that run suffered a severe blow in qualifying at Warmingham following a crash which wrecked the front end of his bike and also resulted in him requiring medical attention. Undeterred though, young Ollie jumped aboard his spare machine and proceeded to then put another maximum point’s score on the board.

He didn’t have it all his own way though, typified by moto one when the fast starting Oakley Kettle and Sebby Moore both took turns to lead the way before Bubb moved through on the final lap for the win. Kettle was the holeshot King again in moto two but this time Bubb took just two laps to get control as Jack Evans got home in 2nd with Kettle 3rd, Will Turner 4th, Harrison Davies 5th and Lewis Couzens 6th.

Showing great resolve, most of the 85cc pack still managed to master the difficult conditions in Sunday’s opening race, a moto red-flagged but which saw Bubb victorious again. Moto two on the second day and with ruts becoming deeper and the track getting rougher, the contest was now becoming a true battle of determination and attrition with Bubb passing Kettle early on. In this one, Moore proved to be Bubb’s closest challenger.

With the field reduced to just eleven starters for the last 85cc tussle, Kettle was again the quickest away and with Bubb down in an early 5th he now had a great chance of finally claiming the win. However three laps in and in trying to avoid a backmarker, Kettle slipped off, dropping down to 5th. Moving up in style, Bubb was again now at the front and there he remained ahead of Moore, Evans and Turner to keep that unbeaten run firmly rolling on!