Brookthorpe ready to rumble for Round 2! 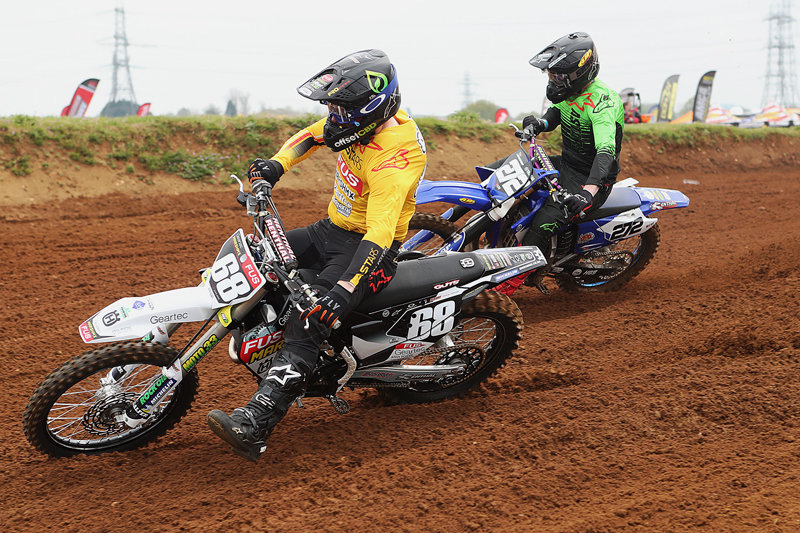 It’s time for the next episode of the 2022 AMCA British Motocross Championship sponsored by Dunlop this coming weekend as the riders converge on the Brookthorpe circuit in Gloucestershire. In the main classes, Nev Bradshaw(MX2), Phil Mercer(Vets) and Ollie Bubb(Youth) have all made flying starts to their respective title campaigns , bagging unbeaten scores in the opener held at Culham recently.

In MX1, Jake Shipton, Josh Waterman and Luke Burton all recorded moto wins at round one. With Shipton though suffering from severe arm-pump after missing just about two years of racing, it was his FUS Marsh Geartec Husqvarna teammate Burton who took the overall win. So going into Brookthorpe, Burton holds a 6 point lead over Waterman in the standings with Shipton a further 4 points in arrears. Tony Craig, James Dodd, Ashley Greedy and Josh Taylor are next up in this one. Although it’s very early day’s in the series, Dodd, defending Champion Greedy and Luke Hawkins who currently sits down in 10th will all be hoping to make the podium this time around and thus keep their title chasing dreams firmly on-track.

Nev Bradshaw on the RJP/Ci Sport 250cc 2T Yamaha got off to a flyer in the MX2 class bagging a nice hat-trick of moto wins. Chasing him home, Shane Carless (2) and Kieran Banks were the runners-up. But whilst the defending Champion Carless will be looking to quickly close the point’s gap on Bradshaw, for Banks the season is already over due to a niggling knee injury. Currently 3rd in the standings, Tommy Alba looked very quick at Culham and will surely be a major player in the MX2 season as will the likes of Rory Jones, Henry Willams, Jake Preston, Corey Hockey, Josh Peters and impressive new boy Kacey Hird also be. At the time of going to press, it’s still unclear whether Bradshaw will compete at all rounds and that uncertainty as now been increased after he appears to have suffered a knee injury whilst competing at Lyng last Sunday.

Turning back the clock, Kristian Whatley(Wulfsport/Meredith MX Yamaha) took top honours in the highly competitive 125cc class during round one. However like Bradshaw, there’s no confirmation that Kristian will be at every round. Currently 2nd in the standings, Matt Bayliss did get the better of Whatley in the last moto at Culham and certainly looks to be a major contender for honours regardless of whether Mr Whatley is in attendance!  Also very impressive in the opening round was youngster Joel Fisher. Taking 3rd overall he finished above the likes of Luke Dean, Danny Lanfear and Chris Povey. The latter rider though was back after two years out of action but still impressed, quickly getting onto the leaders pace and there’s certainly plenty more to come from Chris!

Starting exactly where he left off in 2021, Phil Mercer reeled off three moto wins and maximum points at Culham. Phil did not dominate completely, pushed hard at times by former AMCA 125cc Champion Shane Holmes. On the tiny 2T KTM, Shane produced three very gutsy rides to earn 2nd overall ahead of Gary Davies. With Gary suffering from a very painful knee injury and having no time for any potential surgery, it looks at present to be a season of damage limitation for the Apex GasGas UK rider so Shane could now prove to be ‘Factory’ Phil’s closest challenger. Riding on their local circuit, Gloucester based brothers James and Simon Lane are likely to be in the Brookthorpe mix along with Sean Smith, Jamie Powell, Mark Roe, Matt Chaplin, Brian Staples and co.

Although he is unlikely to contest all of the rounds due to other commitments, Youth 85cc winner at Culham Ollie Bubb will hopefully be at Brookthorpe this weekend. Stylishly reeling off three smooth moto victories last time out, Ollie’s closest challengers proved to be Wyatt McGregor, Sebby Moore and Jack Evans. The 2021 AMCA SW85cc Champion Oakley Kettle also started 2022 in style with an impressive 5th overall in this Youth class. Now on a big-wheeled machine, Oakley finished ahead of Harrison Davies, Rylee Francis, Will Turner, Tallis Price and Jonas Brown.

The 2022 AMCA series not only offers extra prizes from Planetmoto, Race Wear X, Muscle Doctor and Donjoy but also incorporates additional classes built into the already established MX1, MX2, 125cc, Vets and Youth groups. So after round one, Josh Canton(MX1 Cup), Josh Peters(MX2 Cup), Joel Fisher(125cc Youth Under-18), Phil Mercer(Vets Over 50’s) and Oliver Bebb(Youth SW85cc) are the respective leaders. So get along to Brookthorpe on May 14th for a great weekend of AMCA Championship racing. The local postcode for this popular venue is GL4 0UT with admission charges being for the weekend Adults £15, OAP’s £10 or for just one day Adults £10, OAP’s £5 with accompanied Children Under-16 being allowed in for FREE.