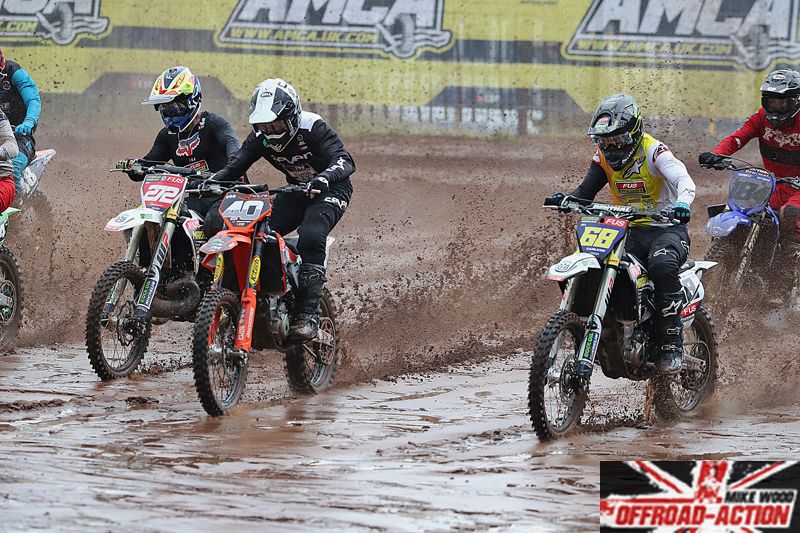 What an ultra-tough challenge for both man and machine round 5 of the AMCA British Motocross Championship at Hawkstone Park was to be! Heavy rain had turned the famous Shropshire venue into an absolute sloop fest, conditions being so deep that it sapped engine power and fried clutches. Indeed so bad was the heavy going that racing was eventually restricted to just two blocks of action with it being a big achievement just to bring it home and get to the chequered flag!

Although Ashley Greedy, Nev Bradshaw, Kieran Banks, Phil Mercer, Tyla Hooley and Oakley Kettle took the overall victories during round 5, every single competing rider was to be the real Hawkstone winners and all deserve a massive pat on the back for their herculean efforts! A special mention though should go to those rising young stars of the sport in the Youth 85cc class who refused to be intimidated by the heavy going, showing great determination and abundance of skill in not only mastering the track but still continuing to race.

Not surprisingly the conditions were also to have some bearing on the eventual results throughout the day but in MX1 series leader Ashley Greedy produced another majestic, controlled performance and thus bag the overall verdict, in the process also increasing his advantage at the top of the standings. The LHRT Kawasaki pilot is now 29 points clear with the very consistent James Dodd moving into 2nd and Josh Waterman slotting into 3rd as defending Champ Luke Burton drops to 4th following front brake disc problems in moto two.

Having also opted to compete in Saturday’s AMCA Northern Group event at Hawkstone, Luke Hawkins proved that he was dialled into the track by setting the quickest qualifying time for the MX1 Championship action. With conditions poor, it was though Dodd who fired out of the gate in MX1 moto one to lead the way with Waterman, Burton, Zac Stealey and Greedy in tow. Doddy was sailing through the Hawkstone mud puddles in style and controlled proceedings up until lap five as Burton then came through. On completion, Greedy had managed to get up into 3rd just ahead of Waterman with Hawkins, Stealey, Jayden Ashwell, Jimmy Margetson and Mark Young next in the finishing order. This was a particularly impressive performance in the rain from Margetson who had initially gated in 16th.

In a dramatic start to MX1 moto two, title contender Burton was in trouble bending his front disc brake and damaging the brake hose in a deep, water filled Hawkstone rut. After running repairs, Burton was back racing but being three laps down it was now a case of damage limitation and the need to still just finish the contest. At the front the rapid Dodd on his Ultimate Wheels/Thunderroad Honda had led the charge. Under intense pressure from Hawkins, Dodd held on until three laps from home before the Apex GasGas UK ace got through. In the closing stages, the very determined Greedy also relegated Dodd as Waterman took 4th from Stealey, Luke Meredith and Sean Wainwright.

Having enjoyed an illustrious career and raced many laps around the Hawkstone venue, Nev Bradshaw put his vast experience to good use by producing a superb opening MX2 moto performance on Sunday. Being the current AMCA MX2 series leader, Nev on the 250cc 2T FUS Marsh MX Husqvarna led moto one from start to finish, his winning margin being nearly 15 seconds as Henry Williams took 2nd from Adam Collings, Shane Carless and James Wainwright. Taking out a wild card entry for Hawkstone, Wainwright a double AMCA mx2 Champion had earlier set the fastest qualifying time. Also in the mix in this one were Rossi Beard, Lewis Dowdeswell, Rory Jones, Josh Peters and Josh Canton.

FUS teammates Carless and Bradshaw both took turns to lead MX2 moto two but it was young Wainwright who was to bag the win. Gating 4th he then took control on lap three as Bradshaw and Carless followed him home. Having another great ride, Collings was 4th from Beard, Ray Rowson and Dowdeswell. Being another rider with vast experience of competing at Hawkstone, Rowson campaigned a 250cc 2T KTM on Sunday and appeared to be having lots of fun! For Wiliams, moto two was not quite as much fun, after getting bogged down in one of the worse wet sections on the track and dropping down to 14th, he fought back to earn 9th at the flag.On the MX2 podium though it was Bradshaw, Wainwright and Carless whilst in the race for the title, Bradshaw is now 10 points clear of Shane with Williams in 3rd.

After setting the fastest qualifying time in 125cc, Bradley Tranter then grabbed the moto one holeshot and thus lead the high revving pack. Three laps in though and Tranter suffered a painful excursion over his KTM handlebars resulting in a dislocated shoulder. Somehow he picked himself up to remount and eventually finish in a brave 4th spot! Taking the win in this one was the very quick Lloyd Morgan chased all the way by fellow Fantic rider and series leader Kieran Banks. Getting home in 3rd was Harrison McCann as Tomas Wright, Joel Fisher, Matt Ridgway, Jordan Wright and Luke Newman put some very useful points on the board.

With Tranter a moto two non-starter, the superb Banks took full advantage by adding another win to his already very impressive total. Banks was certainly made to work very hard for that one as both Stuart Owen and Morgan had earlier led the way. Banks though on his Meredith MX Fantic was not to be denied, taking control on lap four. Incredibly on completion of this contest, Kieran had built a massive 30 seconds winning margin with Morgan in 2nd, Owen 3rd and Newman having his best ride of the series so far in 4th. With Jordan Wright, Tomas Wright and Joel Fisher again in the points, next up in 8th was former three times AMCA Champion Jack Cox. Making a very welcome return to action, Jack showed that he had not lost any of that old style, skill and speed! By bagging his fourth overall success of the title race to date, Banks has now built a big 78 point advantage in the 125cc standings with Morgan moving above Tranter and up into 2nd spot.

Adding some extra spice to Sunday’s AMCA Vets Championship action, and coming out of the FUS awning was a couple of wildcard riders, Adrian Bradley a former multi AMCA and double IMBA European Champion and David Dunn. The overall result though in the Vets was to have a very familiar look about it as Phil Mercer took the win from Gary Davies and Paul Burn. Being another rider with vast Hawkstone and wet weather racing experience, Mercer used all of his track craft and guile to win moto one. Gating 4th the FUS Marsh MX Husqvarna pilot quickly passed Dunn and Simon Lane to move up into 2nd. Then by lap three Phil was in control and there he remained as Davies took the runners-up slot from Adrian Bradley, Dunn, Burn, Lane and Anthony Bennett. For defending Champion James Lane the day though did not start well, unable to fire his Husqvarna machine into life, he was left to stand and watch the action instead.

James was thankfully back under power for the second Vets clash as Gary Davies led the charge. On lap one though Gary got temporarily bogged down in a deep, wet corner thus enabling Phil to take the advantage and control of the moto. The popular Cradley Kawasaki rider competing on home soil was to quickly regain forward momentum following his sticky scare and really chase Phil all the way, inserting very heavy pressure on the FUS star. After his opening race problems, James Lane bagged a welcome 3rd from Bradley, Burn, Matt Chaplin, Dunn and Christian Seldon. So on the podium it was Mercer making it 5 out of 5 overall wins joined on the box by Davies and Burn. In the series standings Phil has slightly increased his advantage again at the top, the gap now being 28 points as Davies, J Lane, Burn, S Lane and Sean Smith are next.

Incredibly 34 young 85cc riders came under starters orders at Hawkstone with the entry being boosted by three very impressive ACU Youth racing stars, Tyla Hooley, Shaun Mahoney and Freddie Gardiner. Taking the overall win on the day was Hooley son of former top AMCA and IMBA European Championship contender Mark. And, boy, can young Tyla ride, producing a superb performance of control, maturity and style to master the testing Hawkstone sloop, his Dad must have been very proud!

Also having a great day at Hawkstone was AMCA series regular Jack Davies and indeed he was to be the moto one pacesetter after claiming the holeshot before Hooley got through in the early stages. From here onwards it was Hooley all the way as Mahoney took 2nd from Davis, series leader Oliver Rigby, Gardiner, Kalvin Kelly and Benjamin Sullivan. Whilst Rigby bagged another 43 big Championship points, the day did not start to well for his rival Charlie Hucklebridge. Not enjoying the conditions, Charlie had to settle for 13th in this one.

In moto two, Davis again led the way before Hooley came storming through. Turning on the style and with the circuit a little drier, Hooley scorched to another win, incredibly 53 seconds clear of Mahoney, what a performance that was! Next up were Kelly, Sullivan, Wyatt McGregor and Davis. In this one the AMCA Championship top two both failed to score as Rigby’s bike expired and Hucklebridge disappeared after the opening lap. So it was Hooley, Mahoney and Kelly on the podium whilst in the title race, Rigby is now 47 points clear of Hucklebridge and Davis. In the SW85cc class, Oakley Kettle took the win on the day from Harley Prickett and Harrison Davies. Kettle also leads that particular Championship just 3 points clear of Prickett.