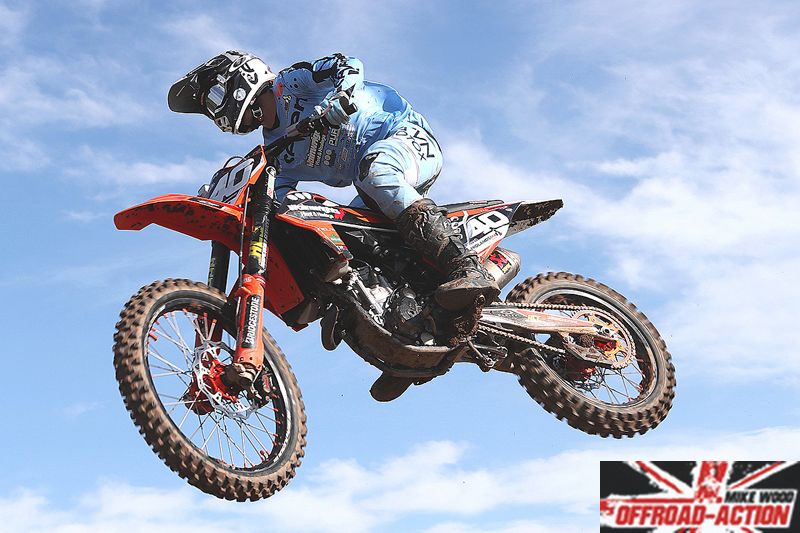 Going into round three, just 6 points separated the MX1 top three of Luke Burton, Josh Waterman and Neville Bradshaw. Whilst Burton and Waterman bagged another podium place at Warmingham, the unlucky Bradshaw endured a nightmare picking up just 44 points and 27th overall on the day. In moto one, James Dodd, Ashley Greedy and finally Waterman led the contest. Series leader Burton had gated 7th before moving up into 2nd and challenge for top slot only to slip back to 5th. On the final lap, Luke repassed Tommy Alba to earn 4th at the flag behind Waterman, Dodd and Greedy with Adam Chatfield, debutant Jayden Ashwell and Corie Southwood next up. For Bradshaw this moto was a disaster, suffering from a seized back brake after he had overfilled the brake reservoir!

MX1 moto two was to then produce a classic as five riders disputed the leadership for just about the entire duration. Showing fantastic composure after grabbing the holeshot, Southwood held on to earn his maiden AMCA MX1 win despite intense and constant pressure from Burton, Greedy, Waterman and Chatfield, what a race! Taking a rather lonely 6th was Dodd ahead of Bradshaw and another debutant Josh Taylor.

Then showing though just how quickly fortunes in motocross can quickly change, Southwood after that moto glory was to endure a final race nightmare. Losing the use of his back brake after damaging it in a deep rut, he then crashed heavily leaving him down in 17th place. In this one, Bradshaw had made a glorious holeshot and led the first three laps before being forced out with a puncture on the ‘Big Red CR500’, compounding what was a miserable day for the popular 2T ace. So moving to the front in this one to earn the win was Adam Chatfield, seeing off late, heavy pressure from Dodd as Burton got home 3rd from Greedy and Waterman who passed Taylor on the final lap following a tough race long battle. Having his best ride of the campaign so far, Bradley Tranter took a great 7th in this one. In the title race, it’s Burton leading the way just 6 points clear of Waterman with Greedy now 3rd and a further 23 points in arrears.

Just what can you say about the brilliant Jamie Wainwright as he further increased his lead in the MX2 title race. At Warmingham, Jamie reeled off another three big moto wins with the equally talented Ryan Crowder being the only rider to head Wainwright during the day. In moto one as Wainwright controlled all the way from gate to flag with Luke Dean in 2nd, this was all about a brilliant five rider tussle for 3rd. Eventually Henry Williams won that one despite the very best efforts of Crowder, Lewis Dowdeswell, Josh Coleman and Mark Young. Also enjoying a right old scrap were Jansen Day and Cory McShane for the right to finish 8th.

MX2 moto two and Crowder blasted his KTM to the front leading the way for a couple of laps before Wainwright came through for another win. Next in the finishing order was Day after working hard to see off Young and Williams whilst Jake Preston on the 2T KTM produced his best ride of the series to get home in a great 6th. Starting down in 16th, Jordan Eccles came through strongly to earn 8th, closing rapidly on Coleman.

In the final MX2 clash it was the Wainwright show as he stormed to another gate to flag win with the gallant Crowder again taking a fine 2nd. Williams who has been right in the mix in all three rounds so far got home in 3rd spot in this one, enough to earn a richly deserved podium. Having his best ride of the day, Eccles moved from 19th up to a superb 4th with Preston impressing again in 5th. Starting the day with a very strong 2nd, Dean then tasted the Warmingham dirt in the remaining clashes going 14/8. In the Championship standings as Wainwright gallops off into the sunset, Crowder holds 2nd with just 10 points then separating the next three riders, Coleman, Willams and Dean.

The fast starting Nathan Bache led the opening 125cc contest for five laps until series leader Shane Carless came through for the win. Taking 2nd was Jack Timms making his debut both for the FUS Marsh MX Husqvarna team and in the AMCA 125cc series. Carrying his fine form from the previous week’s round at Long Lane, Matt Ridgway took 3rd in this one with a storming ride after initially gating in 17th. Also starting strongly were Jimmy Margetson, Clinton Barrs, Jordan Wright, Jonathan Roderick-Evans and Travis Steels. Not enjoying the start to his day though was Chris Povey suffering a downhill crash when holding 4th.

In a rerun 125cc moto two, Povey had led both attempts. But once again a fall halted his progress, tumbling in a deeply rutted corner then being hit by the following Travis Steels. With the unlucky Povey picking himself up,  Roderick-Evans controlled before a determined Timms glided through for the win leading home his FUS teammate Carless, Damon Strydom and Wright. Once again, Ridgway, Barrs, Bache and Margetson were in the mix.

Bache was quickest away in the final 125cc moto leading for five laps before being passed by Carless and then being overhauled by Timms and Margetson. Having his most profitable ride of the day, Povey took 5th as Ridgway confirmed a deserved podium place by finishing 6th. On that podium, FUS riders Carless and Timms filled the top two places with Carless also increasing his series lead to now be 48 points clear of Margetson, Strydom and Bache.

In the AMCA Vets title chase, the 2019 Champion Jamie Powell returned to inflict the first defeat of the season on the flying Lane brothers. James Lane though celebrating his 42nd birthday did still go onto earn the overall win on the day and also maintain his Vets series lead. In all three clashes it was Paul Burn, the holeshot King who led the way before eventually being overhauled. Burn led moto one for six laps as first Simon Lane then James Lane passed him. Therefor Burn had to settle for 3rd as Powell having his first ride of the season took 4th with Kevin Rogers, Chris Jones, Andrew Watkins and Anthony Bennett next.

In a super Vets moto two, James Lane just held off Powell to take the win from Burn, Simon Lane and Rogers. Quickly back into the groove and finding his rhythm, Powell then passed Burn to win the final moto. On lap seven, James Lane had held 2nd before making an uncharacteristic mistake when dropping his LRT Husqvarna in a rutted turn. So, James had to settle for 4th this time out behind Brother Simon with Rogers, Bennett, Brian Staples and Jones next up. In the title race, James now leads Simon by 12 points with Burn a further 26 points in arrears.

Although Joel Fisher blasted to a scorching maximum points score in the Youth 85cc class, it’s still Yarin Evans leading the title race. Evans is now just 4 points better off than Fisher so it’s going to be a tight, nervous run-in to the final chequered flag of the season! At Warmingham, Fisher was simply brilliant, strolling to victory in moto one as Evans had to work overtime to see off Lewis Roden and Tyler Smith. Next home in this entertaining opening clash were Charlie Hucklebridge, Oliver Rigby, Danny Webster and Solomon Levey.

In moto two, Evans and Smith chased the flying Fisher to the flag as Roden who had started strongly dropped out of contention in the early laps. Oakley Kettle had a great ride in this one to earn 5th whilst Caleb Greaves, Rylee Francis and Jonas Brown also worked hard to earn top 10 places.

With another gate to flag success, Fisher confirmed his overall victory in style during moto three. The consistent Evans, Roden, Webster, Smith and Kettle were next up so the Warmingham podium was confirmed as Fisher, Evans and Smith filled the available places.