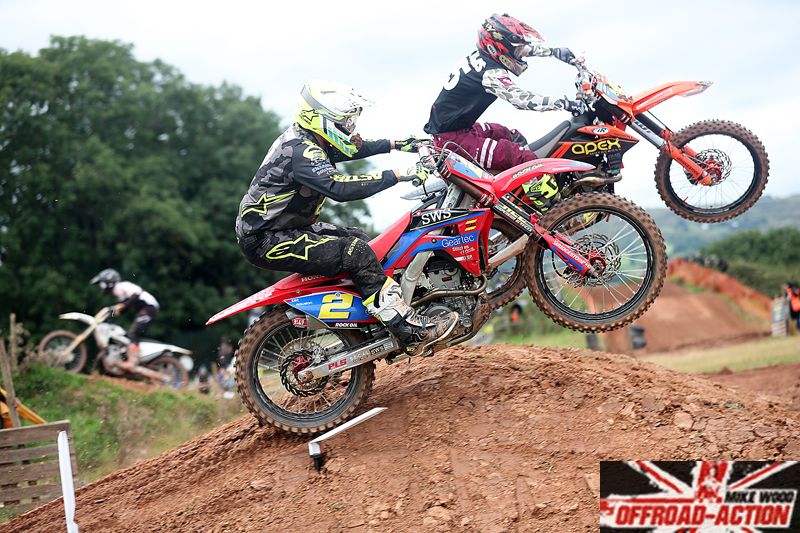 After the enforced break, the AMCA roared back into action on Sunday with a superb opening round of the British Motocross Championship powered by Datatag and supported by Dunlop.

Following a week of unsettled weather, the Boraston circuit which was initially wet in places then became a true rut city producing numerous lines in just about every corner. The drying conditions also meant that there was plenty of tack and grip to greet the first big MX1 clash of the day, a class full of high quality and potential moto winners. In the opening clash, it was FUS Marsh MX Husvarna pilot and 2019 Weston Beach race winner Ashley Greedy who led for the majority of the contest before being passed by Josh Waterman two laps from home. Taking 3rd was James Dodd ahead of impressive MX1 debutant Corie Southwood, Neville Bradshaw on a 1998 500cc Honda CR two-stroke machine, Luke Burton, Adam Chatfield and Tommy Alba.

In MX1 moto two, Greedy again led the way but his progress was to be halted four laps in due to a rear wheel puncture. Managing to get back to his pit bay, Ashley made a quick wheel change and thus rejoin the race, eventually going onto earn 20th place. Taking the win again was the supreme Waterman with another accomplished display followed by Dodd, Bradshaw, Burton, Chatfield and Southwood.

Proving that he is already right on the MX1 pace, Southwood quickly go past Dodd in the final moto and led for several laps until arm pump set in. Now taking control was Bradshaw on his ‘big red  5’ Honda and there he remained, punching the air in delight as he crossed the line just a couple of bike lengths clear of a hard charging Greedy. Confirming a much deserved overall win, Waterman got home 3rd with the gallant Southwood having to settle for 4th.

In the MX2 Class, it was to be pretty much business as usual with defending AMCA Champion Jamie Wainwright reeling off three impressive wins. After Ryan Butler had claimed the moto one holeshot, Championship debutant Jordan Eccles surged to the front. Putting the hammer down, Eccles then led until just two laps from home before Wainwright who had initially gated in 9th came through for victory. Making a comeback after a 12 month lay-off, 2017 AMCA MX2 Champion Ray Rowson was to make an impressive start taking 2nd in this one with Eccles having to settle for 3rd ahead of Josh Coleman, Ryan Crowder and Jansen Day.

Moto two and Luke Dean on the KTM 250cc 2T led the early charge before the classy Wainwright took over at the front. Also on a KTM 250cc 2T, Crowder had a super ride to get home in 2nd with Rowson, Dean, Henry Williams, Coleman and Day next up. For Eccles this race was to already deliver a serious blow to his potential title aspirations as a rear wheel puncture forced him out on lap three when inside the top ten after having worked hard to haul back  up from an early 21st spot.

MX2 moto three and Dean stretched that KTM throttle wire to the max again as he led the pack away before being passed by Rowson. Ray’s advantage though was to last for just two laps as Wainwright now surged to the front before racing off to claim his hat-trick of moto wins. Rowson eventually got home in 2nd but had to work very hard for his points after first seeing off a very determined Williams then repelling a late challenge from Dean and Eccles. Also inside the top ten again in this one was Coleman, Crowder, Day, Mark Young and Cory McShane.

The big news in the 125cc Championship class before Sunday’s event came with the announcement that MX1 Champion Shane Carless would now be competing. After a week of intensive treatment on a dislocated shoulder, Shane realising that holding onto a big 350F in MX1 would be a struggle made the brave decision to switch over to the eighth litre class and give it a go! And, what a move that was to be having his first ride for 15 years on a 125cc machine he went onto earn a great 2nd overall with a 4/3/1 scorecard behind the very quick victor, Jordan Wright.

With rain falling and conditions at their worst, the super Wright led 125cc moto one all the way as Ross Millard, Conner Challinor and finally Luke Newman held 2nd spot. On completion of a typically frantic 125cc contest, Jimmy Margetson moved up from an early 13th to take 3rd from Carless, Damon Strydom, Shane Holmes and Nathan Bache.

Showing that he definitely meant business, Wright was quickest away in moto two. However on this occasion, the hard charging Margetson was right on his tail and three laps in he took control. In a great scrap for top honours, Jimmy just about held on for victory with Wright 2nd, Carless 3rd, Strydom 4th, Newman 5th and Travis Steels 6th. In a thrilling final 125cc moto which had been restarted due to a red flag incident, Bache, Strydom and finally Carless took turns to lead. The fast Wright had to settle for 4th this time around as Margetson, Steels and Newman were again in the mix. AMCA 125cc Champion back in 2011, Holmes proved yet again that he has still plenty of gas in the tank by taking 8th with another impressive ride. This class also included several of last year’s top Youth 85cc runners who all gave a good account of themselves on their 125cc Championship debuts.

Returning to the AMCA Championship scene, Paul Burn grabbed the holeshot in all three of the Veterans clashes at Boraston before the LRT Midwest Husqvarna duo of brothers James and Simon Lane took total control. Indeed the dynamic duo were in simply irresistible form on Sunday with James taking the overall win going 1/2/1 and Simon taking the runners-up slot on 2/1/2. Next best in this class was Sean Smith from Burn and former AMCA Champion Andy Watkins.

In the opening clash, Burn led for 2 laps before being pushed back to 4th behind James Lane, Simon Lane and Smith as Watkins, Kev Rogers, Chris Jones, John Barnes and Anthony Bennett started strongly. There was then to be drama in moto two as James Lane in the early exchanges found himself in trouble and down to last place! Undeterred he got up, brushed himself down and charged all the way back to earn a remarkable 2nd behind brother  Simon.

Burn was again fastest away in the final moto before being passed by first Simon Lane then eventual winner James Lane. Also having a very consistent day, Smith got home in 4th with Watkins, Jones, Bennett and Barnes next up.

Starting the new Championship campaign in the best fashion possible, Joel Fisher stormed to three impressive wins in the Youth 85cc class. On each occasion, Yarin Evans got home in 2nd with Lewis Roden 3rd. With the above three lads dominating, Caleb Greaves, Oliver Rigby, Charlie Hucklebridge, Harry Bebb and Harley Prickett were the next best in moto one.

All of the above lads were again right in the frame during moto two with Falon Ballie also joining in the fun. In the final moto, Greaves had his best ride of the day to earn an impressive 4th. Likewise Cameron Woodburn got stronger as the event unfolded, taking a super 5th ahead of Rigby, Harry Bebb, Prickett, Ballie and Logan Jay Powell.

Report and pics by Mike Wood